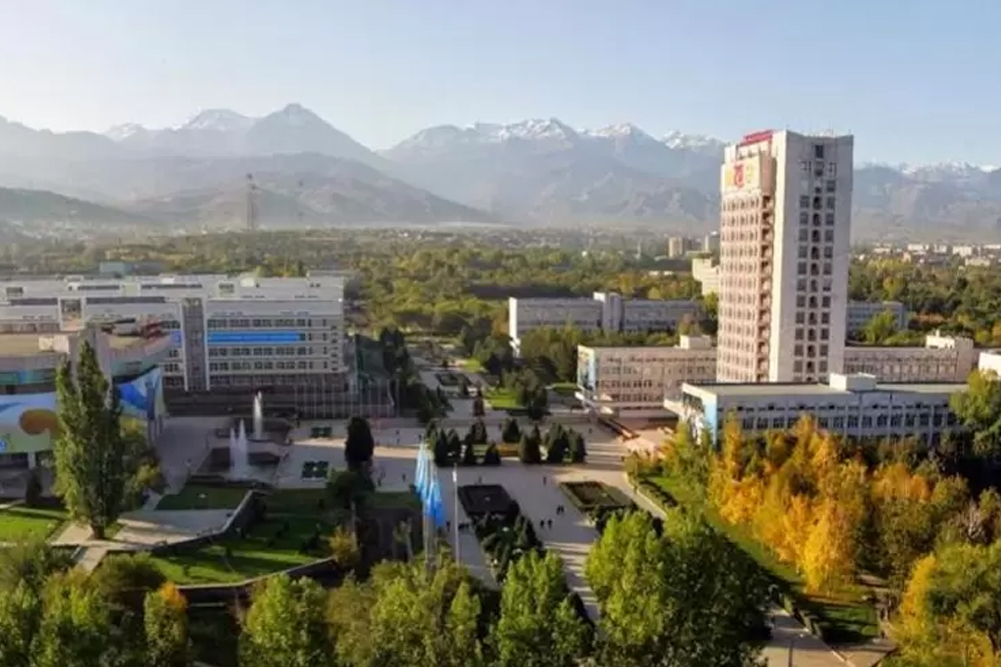 Al-Farabi Kazakh National University (Kazakh: Ál-Farabı atyndaǵy Qazaq Ulttyqnıversıteti), also called KazGU or KazNU, is a university in Almaty, Kazakhstan. Named after the Eastern philosopher and scholar al-Farabi, it is one of the country's largest universities. KazNU is the oldest classical university of the Republic established by a Decree of the Kazakh Regional Committee (KRC) office dated November 13, 1933. One year after Kazakhstan's 1990 declaration of independence, the name was changed to Al-Farabi Kazakh State University. According to the QS World University Rankings KazNU takes 207th place in the rating of the best universities of the world. In 2001, the government classified it as a "national" university. More than 20,000 students, post-graduates and PhD students study at KazNU, and there are more than 2500 faculty members working at KazNU, including 400 doctors of science, professors and more than 800 candidates of science and associate professors. Like other universities founded under the Soviet system, it is highly centralized.

The university has its own campus, so-called "Kazgugrad", on land between Timiryazev Street, Al-Farabi Avenue, the "Yessentai" ("Vesnovka") river, and the Botanical Garden. The main building (GUK) is 15 stories tall and hosts the university administration as well as the History, Economics, Law, Philology and Journalism departments. Al-Farabi Kazakh National University has the largest campus in Kazakhstan with an area of 100 hectares, in one of the most beautiful areas of Almaty. The education infrastructure of the campus consists of 13 education buildings with a total area of 165,000 m² and scientific laboratories with a total area of 18,940 m².
There are seventeen dormitories on campus and four more departments: Philosophy and Political Science, Oriental Studies, Preparatory and International Relations in the second, smaller campus located at the intersection of Karasai Batyr - Masanchi streets. The departments of Physics, Mechanics-Mathematics, and Chemistry were formerly in the second campus; in 2011 they moved to newly constructed buildings on the first.

January 15, 1934, is the day of the official opening of Kazakh State University, which was established at the basis of the Pedagogical Institute by the decree of the Council of Peoples’ Commissars of USSR and VKPb Kazakh regional committee. On December 2 of the same year KazSU was named after the famous Soviet party and state leader S.M. Kirov.
In January 1934, the first entrance exams at the faculties of Biology, Physics and Mathematics were held; in September they were held at the Faculty of Chemistry. In 1937, the first Faculty of Humanities – the Faculty of Foreign Languages was established; a year later, the Faculty of Philology. In May 1941, as a result of joining with the University of the Kazakh Communist Institute of Journalism, the Faculty of Journalism was established.
After the severe years of war, new faculties began to open. In August 1947, the Faculty of Geography was established and, in 1949, the faculties of Philosophy and Economics. As a result of joining with the Alma-Ata Institute of Law in 1955, the Faculty of Law was established.
During the same period a strong scientific educational and methodological base emerged at the university. By the mid-1980s there were 98 departments, 43 scientific research laboratories and 9 scientific research groups at KazSU. The faculty staff consisted of 1180 people; among the faculty staff there were 30 academicians and AS KazAAR correspondent members, more than 100 doctors, professors, more than 600 science candidates, lecturers. Human resources were trained on 21 specialties and 74 specializations.

The university also has research institutes:

The university also has research institutes: