Founded in 1804 as Imperial Kazan University, famous mathematician Nikolai Ivanovich Lobachevsky served there as the rector from 1827 until 1846. In 1925, the university was renamed in honour of its most famous student Vladimir Ilyich Ulyanov (Lenin). The university is known as the birthplace of organic chemistry due to works by Aleksandr Butlerov, Vladimir Markovnikov, Aleksandr Arbuzov, and the birthplace of electron spin resonance discovered by Evgeny Zavoisky.

In 2010, Kazan University received a federal status. It is also one of 15 Russian universities that were initially selected to participate in the Project 5-100, coordinated by the Government of the Russian Federation and aimed to improve their international competitiveness among the world’s leading research and educational centers.

As of January 2020, the University comprises 18 primary educational units, 2 of which are territorial branches. More than 50,000 students are enrolled in over 600 degree programs at undergraduate and postgraduate level (including doctoral and double-degree programs with partner universities); the number of international students is about 9,700 from 106 countries.

Among the subjects of special pride are the creation of non-Euclidean geometry by Nikolai Lobachevsky, the discovery of the chemical element Ruthenium by Karl Klauss, the theory of chemical structure of organic compounds by Aleksandr Butlerov, the discovery of electron paramagnetic resonance by Yevgeny Zavoisky and acoustic paramagnetic resonance by Semen Altshuler, the development of organophosphorus chemical compounds by Alexander and Boris Arbuzovs and many others.

Since its inception, the university has prepared more than 70 thousand professionals. Among the university students and alumni there are outstanding scholars and famous people such as the founder of the Soviet Union Vladimir Lenin, writers Sergei Aksakov, Leo Tolstoy, Pavel Melnikov-Pechersky, Velimir Khlebnikov, composer Mily Balakirev, and painter Valery Yakobi.

After having obtained the status of a federal university, KFU tasked itself with advancing in the global rankings race. This is also the primary metric for the participants of the Project 5-100, a national initiative to boost the competitiveness of the top Russian universities, which Kazan University joined in 2013.

The university has been ranked by QS World University Rankings since 2012, steadily climbing from 601+ to 392nd place. It also has 4 stars in QS Stars Ratings, along with another institution from Tatarstan, Kazan National Research Technical University named after A.N.Tupolev.

It’s currently ranked 601 – 800 by Times Higher Education. It’s also in the 201-300 bracket in University Impact and Good health and well-being rankings by the same organization. KFU first appeared in Academic Ranking of World Universities in 2018 and was ranked 801 – 900 in that year and in 2019.

In Russian national rankings, Kazan University has been consistently ranked among the best, including 16th place in RAEX rankings and 9th place in Interfax National Ranking of Universities.

Kazan Federal University’s Main Campus is located in downtown Kazan, 10 minutes away from the Kazan Kremlin.

The Main Building of Kazan University was designed by architect Petr Pyatnitsky and built in the 1820s. The oldest part of today's Main Building includes three classic portals along with the white foreside of the original 1822 construction.

From 1832 to 1841, architect M. Korinfsky designed the rest of the buildings comprising the neo-classical Architectural Complex of Kazan University. The Main Building Yard now contains the central administrative offices, the Anatomical Theatre, the Library, chemistry and physics laboratories, and the Observatory.

Chemical Faculty Building (since 2003: Alexander Butlerov Chemistry Institute) was built in 1953 with the support of students. The original building was built in the Soviet neoclassical style. In 1960-70s, two high-rise academic buildings were erected to the north and to the west of the Main Building.

The most recent addition was in 2015, when a 7-storey laboratory building was added to the campus.

By President Boris Yeltsin’s Decree in 1996 the Architectural Complex of Kazan University was added to the National Cultural Heritage Register of Russia. During the preparations for 200th anniversary of KFU the East Wing was added to the Main Building and today along with the university administration, the Museum of History of Kazan University, Yevgeny Zavoisky Lab-Museum, the Botanical Museum, Edward Eversman Zoology Museum, and two academic units – the Institute of Fundamental Medicine and Biology together with the Faculty of Law reside there. University sport facilities include UNICS and Bustan Sports Centers built in 1989 and 2010.

KFU is one of just few educational institutions in Russia which offers modern comfortable housing to all students outside of Kazan. KFU dormitory campus is located in the Universiade Village built to accommodate participants of the XXVII World Summer Universiade 2013. It is a residential micro-district for about 12,000 people with a medical center, drugstore, sports equipment rent station, copy center, laundry, beauty salon, cafeteria and other facilities available. The Village project was awarded a diploma "For a special contribution to a socially significant infrastructure creation for youth and sport development" at the world contest FIABCI Prix D’Excellence.

Altogether the premises of Kazan University are located throughout Russia in Tatarstan, Karachay-Cherkessia, Karelia, Mari El and Samara region (Tolyatti).

Why Mbbs in Kazan Federal University

Kazan Federal University Fee Structure has a minimal hostel of around 20,000. 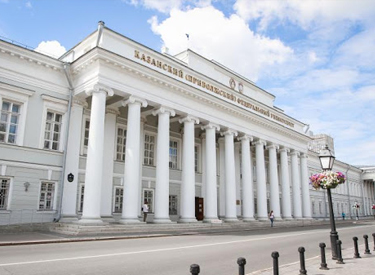 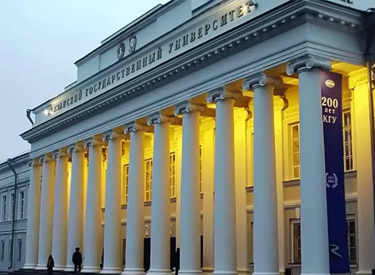